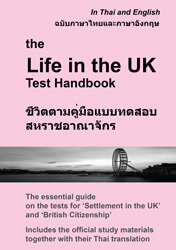 Almost everyone wishing to settle permanently in the UK or be granted British Citizenship now has to pass The Life in the UK Test.

The English ‘official study materials’ that the test is based on are reproduced in full in the handbook together with their Thai translation. The handbook works as it ensures that Thai speakers are able to understand the course material properly in their native language.

Included in the handbook is information about the visa categories and process leading to ‘Settlement in the UK’ and ‘British Citizenship’. Examples of the types of questions that you are asked if you ever have to attend an interview for a British Passport are also included.

“We are reviewing English language requirements across the immigration system with a view to tightening the rules further in the future. We will inform the House [of Commons] of our conclusions in due course.”

The UK coalition has already brought forward, from Summer 2011 to 29 November 2010, the introduction of an English language requirement for migrants applying to come to or stay in the UK as a spouse or partner. There is so far no official information on how to meet the new requirement in Thailand or elsewhere on the UK Border and Immigration websites.

English language tests for UK Settlement and British Citizenship are going to get harder and more expensive. The message is clear. If you think that you will need to pass the ‘Life in the UK Test’ to achieve ‘Indefinite Leave to Remain’ or ‘British Citizenship’ get on and do it now while the test is not yet too hard or very expensive.

“I hear every day that Thai speakers living in the UK have put off taking the Life in the UK test because of the difficulty in learning the course material. The Thai translations of the official material in our handbook make studying for and passing the test much easier.

The Home Office have announced that it intends to ‘tighten the English language requirement rules’ which is a clear way of saying that it will ‘make the English tests harder’. I would get on and aim to pass the test now before any new tests and requirements are dreamed up!

2. Home Office announcement 26 July 2010 – The Minister of State for Immigration (Damian Green) ‘Implementation of a new English language requirement for migrant spouses intending to settle in the UK’